Productivity (noun): the effectiveness of productive effort, especially in industry, as measured in terms of the rate of output per unit of input.

When did we start applying industrial math to the human experience?

Let’s ditch the mechanics and take a look at a new formula that explores “the effectiveness of productive effort.”

How do we measure this? Is there a formula that makes space for everyone’s unique version of success? Here’s what is working for me and the clients I serve.

We’ve already looked at the definition of productivity, so let’s break down process and prioritization.

Priority (noun): the fact or condition of being regarded or treated as important; a thing that is regarded as more important than another; the right to take precedence or to proceed before others (plural noun: priorities).

Got it. So where is the misalignment? Psst…lean closer…it’s in the plural.

Somewhere “PrioritY: Party of One” became “PrioritIES: Everything is Important.” Can I get an Amen?! Where priority becomes priorities, productive effort rapidly deteriorates.

Process (noun): a series of actions or steps taken in order to achieve a particular end.

Yes! We’ve got that one down. Right?

In its simplest form, a process must be definable, repeatable and teachable. Everytime {THIS} happens, we do {THIS.}

That seems easy enough. So where’s the kicker?

A process that only lives in your head isn’t a process, it’s a preference. ::mic drop::

Most process breakdowns stem from lack of communication, which breeds disappointment, resentment, confusion and bottom-of-the-barrel morale. Simply put, we have a ton of expectations and internal processes rolling around in our heads, yet we often forget to speak them out, which sinks productive effort right to the bottom of the ocean.

::cue The Notebook GIF of Ryan Gosling screaming “What do you want?! and Rachel McAdams screams back “It’s not that simple!”:: 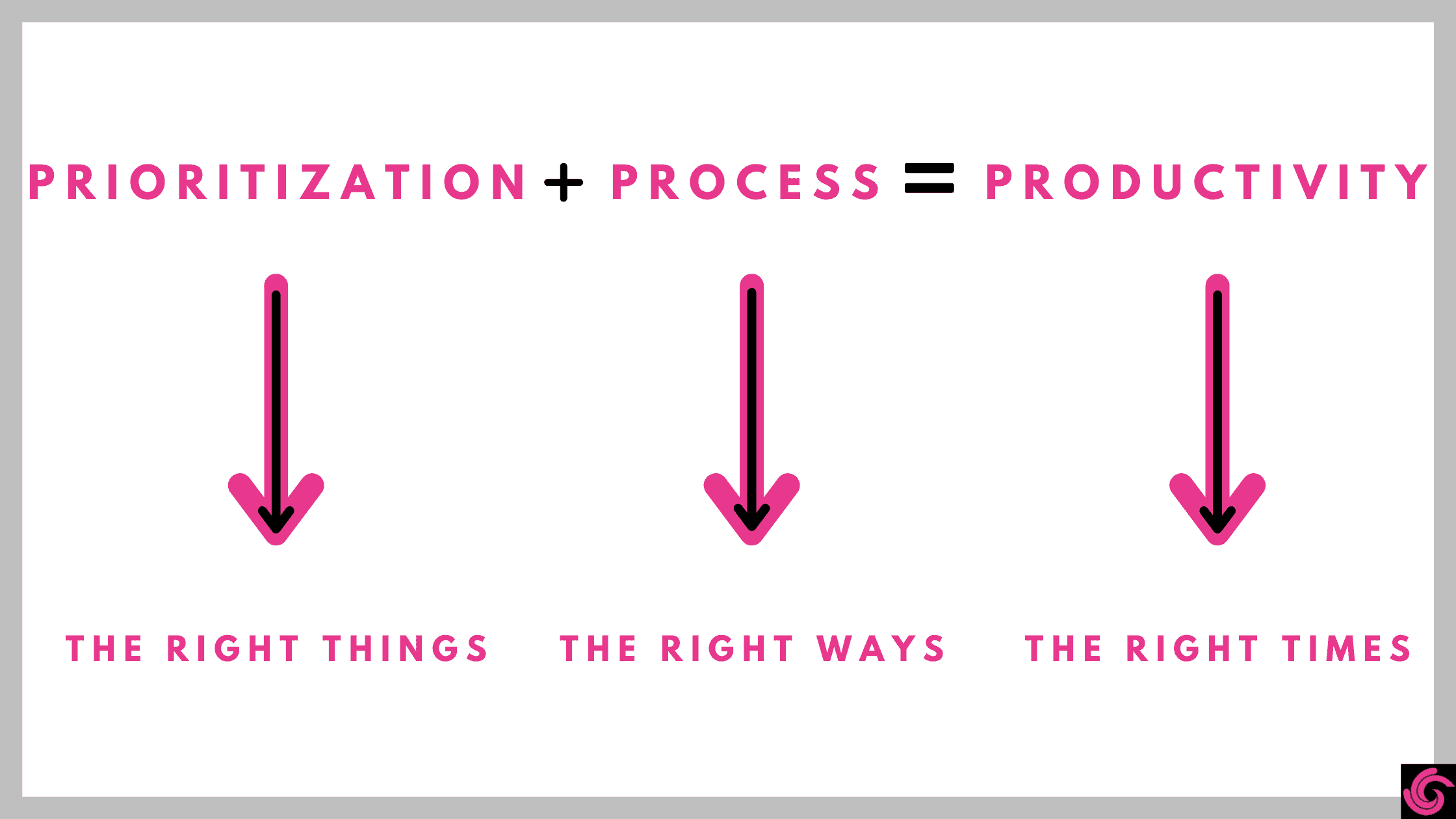 How do you know when you’re edging into dangerous territory? When do our best intentions start working against us?

One of my very favorite influencers, Juliet Funt (CEO of WhiteSpace at Work), describes what she calls the “Thieves of Productivity.”

Do you ever find yourself wishing you had a little less ambition? Do you ever wonder if you’ll ever get a break? It never stops! If I stop, it will all fall apart. I have too many ideas! If I don’t do it, someone else will! Does FOMO ring a bell? Hello, overdrive.

Do you find yourself looking at a million great ideas that are perfectly crafted in your head, but they never see the light of day because there’s just “one more tweak” that would make it better? If I just do this one more thing, then I can launch? Welcome, perfection.

Do you ever get lost down the research rabbit hole or convince yourself that you just need one more certification or one more degree to fully show up in the space where you are called (and then you never actually get there)? Hiya, information overload.

Do you ever reach that place where you feel the electricity coursing through your veins as you work because the pace is literally pushing you into Mach 10 anxiety and the stress feels like it is literally radiating off your body? We meet again, frenzy.

The great news is that it doesn’t have to be this way. In fact, it shouldn’t be this way, and it was never meant to be this way. The human experience cannot be measured by industrial math. We are so much more than our numerical output!

I’ve spent the better part of my life measuring my worth by my performance. Those thieves above were my closest friends, because I was convinced that showing anything less made me inconsequential, a slacker or a less valuable contributor to the world around me. It was quite the discovery (translation: A LOT of therapy) to realize the math was working against me, but even more importantly, to learn and embrace the truth that my identity was and never will be reflected in my work. My worth was established by God long ago, and there is nothing I can do to change that. Doing the right things, the right way, at the right time is enough, because I am enough.

Breaking up with this lie and believing the truth is a lot easier said than done, but the even better news is that you don’t have to walk this path alone. This is why the formula above works for my clients. It is grounded in my fervent belief that their worth exists outside of their work and their personal definition of success is unique to the life they’ve imagined for themselves, and the purpose to which God has called them. SO much wider, deeper and more profound than math.

So maybe the title of this blog is a misnomer in and of itself, because yes, we’ll determine how to get more done by doing less, but the bigger lesson is understanding that isn’t the ultimate goal. The prioritY, party of one (see what I did there?) is YOU and when you understand, embrace and protect your intrinsic worth, the math always works in your favor.

iOS Update 14.5 and How It Affects Ads On Mobile
Next Post: How to Find and Keep Rockstar Talent for Your Team